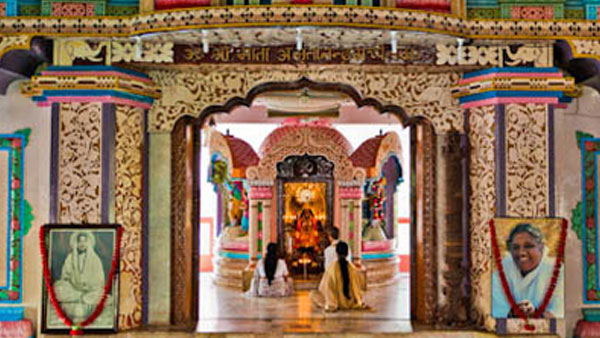 It was the first big cement structure to be built and took five years to finish – from 1988 to 1992 – as the financial means of the ashram were still very modest at the time.Above the central entrance stands a majestic statue of Lord Krishna driving the chariot of Arjuna during the Mahabharata War. Lord Krishna gave the teachings of the Bhagavad Gita at the outset of the war.The temple’s inner shrine is dedicated to the Goddess Kali who is the symbolic destroyer of negative tendencies. The Kali idol in the temple, was crafted in Calcutta as per Amma’s instructions. Mother Kali is the destroyer of the ego.

For the next nine years this becomes hub of Ashram activities including Amma’s Bhajans, Meditation and Darshan