Sreepriya Rohit is a graduate of Amrita Vishwa Vidyapeetham’s Bachelor of Technology in Computer Science and Engineering. She and her husband, Rohit Kartha, currently live in Munich, Germany. Both of them took time off work to volunteer with Embracing the World’s station for refugees at the Budomierz border crossing between Poland and Ukraine.

It is for the first time in my life that I got a chance to experience war at such a close distance. It was indeed some of the harsh realities of life that I wish never existed. On 4th March, Rohit and I started our journey to the Polish border.

Swami Shubhamritananda coordinates Embracing the World’s humanitarian work in Europe. When he called us one day before to brief the situation, the picture I had in my mind was that there are around 40 Indian students in a hotel room in Poland, they had gone through some trauma, and needed someone to talk to.

The task looked doable, even though I never did that before. We found a flight the next day, and started on our mission. Our Polish contact, Marcin Krol, messaged that he will send someone to pick us up at the airport.

From Krakov airport, it was nearly a 3-hour drive to the Ukrainian border. Once we exited the highway, it was all countryside road for a long time with small houses along the way. Then the number of houses lessened and it became just barren, nothing in particular. Felt like a no man’s land in the middle of nowhere.

When we finally arrived at our accommodations, Marcin greeted us with a great sense of relief. He thanked Amma over and over again for sending us there. He took us to our room in the small guest house that had a shared kitchen and doorways.

Two kids were playing while their mother was cooking in the kitchen. Marcin explained that they were Ukrainians who had just crossed the border two days ago. The landlord was a kind man who gave rooms to all refugees in need. I asked Marcin where the Indian students were. He said many were expected to arrive soon at the border, just 2km from the guesthouse.

At this point, I realised the task was not just talking to some students, but something larger. We headed to the border, and as we arrived, we saw many white tents full of women, little children and old people.

Anyone who just crossed the border was able to wait in the tents until accommodation was found or travel was organised to their respective destinations. Hot soup and sandwiches were available. One of the tents had emergency care and medicines. Another one was full of clothes. The heated tents were packed with people who sat on wooden benches and warmed themselves from the freezing cold outside.

Marcin took us to the checkpoint, which was about 700m away. As we walked, we saw many groups of refugees heading from the checkpoint towards the tents. It was -5°C and 9pm. An old woman, a few metres away from us, was struggling to carry her bags. After some trials, she put everything down in exhaustion. Her eyes reflected total helplessness, staring at her things.

Marcin immediately talked to her in Ukrainian, took her bags, and assisted her to the camp. I watched her slowly follow him. She was definitely more than 70 years old. The two big bags must have contained all her valuables. And there was no one to pick her up from the border. I asked myself, “Where will she be going after she reaches the camp? Will she manage all alone?”

Many such questions started popping up in my head. We saw more and more old people and women with their luggage. We didn’t know any Ukrainian, but used hand gestures to offer to help a few of them. However, we didn’t have any volunteer jackets, so two Indian people showing hand gestures to a bunch of refugees who just escaped a war zone may have not seemed like a scaling solution. People refused to give us their bags to carry, probably because they were traumatised with fear and did not know if they could trust us.

Seeing our desperation to help, two Indian volunteers came near us and asked, “Naattil evidunna? Malayalikal aanalle?”, which was Malayalam, my mother tongue, to ask us whether we were Malayalees. I nodded yes with a big smile. The volunteers gave us a detailed overview of what had been happening at the border in the past few days.

One night, we met a woman in her fifties. She was waiting for her parents to cross the border, and her eyes were so filled with anxiety. We tried to calm her down, giving some hot coffee and starting a conversation. She didn’t speak English, so Marcin was translating for us.

Her parents were from Donetsk, one of the far east regions that was under Russian invasion. Their house was completely bombed, but they had managed to flee one day before with all their vital belongings. The woman’s mother was 72 and her father was 76. Every time she called them for an update of their escape, they were crying in agony. They had been travelling for a week by then. Two days on the train and two days on a bus, with some breaks in bunkers along the way.

At that moment her parents were finally at the Budomierz border, but it had already been five hours since they arrived. They were waiting in line for the paperwork to get done. No words could console the stress and anxiety that the woman was going through. We helped her sit for a while in our tent, but she would get up soon, and keep staring at the checkpoint. Intensely looking at the checkpoint doorway without blinking an eye.

There was another mother who was waiting for her two girls stuck on the Ukrainian side. The woman appeared rich and sophisticated; she came to Poland for work. She expected a smooth journey when she arrived, with both daughters crossing the border quickly. But by then, she had been waiting for more than seven hours.

She was in touch with the girls by phone, and it seemed they were very cold. I suggested one could stay in the line, while the other go to the heating area and warm herself. But she said they were too scared to leave each other and get separated. They had no choice but to stay in the cold and wait.

There were so many stories of such experiences. For us, as volunteers, it was a priceless moment when we watched families uniting at the border, hugging each other and crying their eyes out.

Another night, there was an African woman who just crossed the border and arrived at our stall. She had three children with her. We smilingly offered her coffee, and some chocolates and fruits for her children. We tried to comfort her, asking how she was doing.

With a great sigh of relief on her face she said, “I really appreciate what you all are doing. You cannot imagine the stress we had to go through to reach this point and feel safe. I am from Kharkiv. It was all sounds of bombs and bullets for days. My son is still scared, even when he hears the small sound of things landing on the ground. After a really long period, you are the first ones to ask me if I am doing all right. It really matters a lot. Thank you so much.”

I remembered Amma’s words: “A loving smile, a word of compassion, and a tiny act of kindness can already help people a lot.”

We saw her with tears in her eyes as she left with her children. I thanked Amma for giving us this wonderful opportunity to simply be there as an instrument in her hands. It is incredible to see how Amma’s love is reaching out to thousands of people in various ways.

This is, in fact, one of our first volunteer activities where Amma was directly checking the progress every single day through Swami Shubhamritananda. Our volunteer efforts would not have manifested in such a powerful way without Amma’s counsel.

For the first few days, we had very little food to eat in the camps. Being vegetarians, we couldn’t eat the meat soup there. We were surviving on bread, butter, and some cup noodles. The weather was also quite extreme. Our schedule was 9am to 9pm, though sometimes went longer, and we were standing out in the tent most of that time. Being from Kerala, that was personally rather difficult to endure. For the first three days, we didn’t even have heating.

However, I felt such a strong presence of Amma around our stall. It felt effortless to manage the situation. I was constantly reminded of Amma’s darshans for long nights, offering compassionate smiles and words to people coming with longing hearts.

I am sure this is the same inspiration for every volunteer supporting this effort. Every time we felt tired, there was Amma’s love and energy gushing into us from somewhere, refilling us with enthusiasm and strength to move forward. She also gave constant guidance and suggestions on how to improve the service.

After nine days at the border, Rohit and I had to return to work and boarded the train back to Germany. The impact of the experience was something I had never imagined before. War is the culmination of human ego in its most powerful form—a constant pursuit of control and domination. Words are not sufficient to describe the aftermath of destruction it creates for others.

When I close my eyes, I still see faces of old couples walking with heavy luggage, mothers and kids left alone without a father, exhausted children. They were all escaping the border, literally running for their lives, and looking for a safe shelter.

Though it is such a painful sight to remember, I also feel extremely humbled with everything life has showered upon me.  I have a home in which to sleep, food to eat, and loving friends and family.

May humankind find the strength and courage to overcome these dark times, supporting each other. May there be an end to this arrogance of human ego. May Amma’s love bring solace to the aching hearts and shine in their lives, giving them the strength to move forward.

Volunteers across Europe are coordinating donations for essential aid and helping to provide accommodation for refugees.

World Environment Day is celebrated on June 5th to encourage citizens around the globe...

A press conference and first viewing of the new documentary “Amma’s Way” by Italian...

Food rescue is still a relatively new concept in the environmental movement. It is...

Vienna is just a five-and-a-half hour drive to Tiszabecs, a village on the eastern...
Previous articleHungary-Ukraine border: A second support station for refugees
Next article2 Atal Tinkering Labs inaugurated at Amrita Vidyalayams in Tamil Nadu 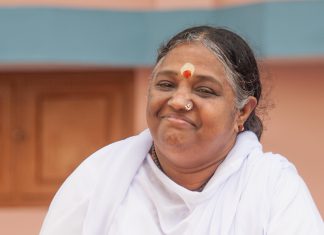 University of Mysore to Confer Doctorate upon Amma 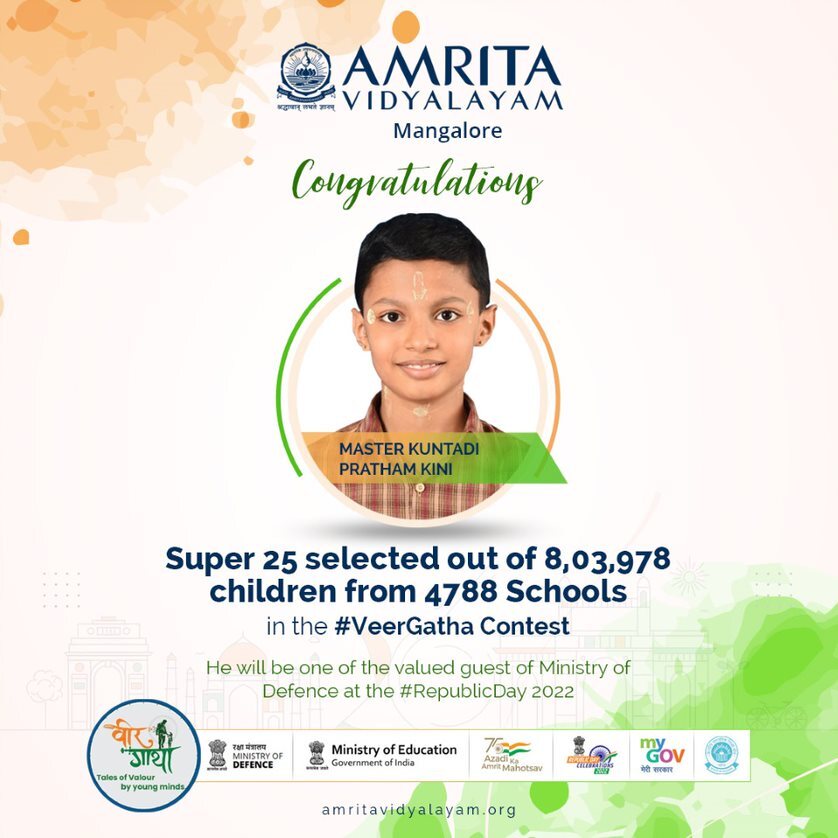 January 15, 2022 0
Amrita Vidyalayam, Mangalore student gets a special invitation from Defence Ministry for the Republic Day event  Pratham Kini, a student from Class 5 at Amrita... 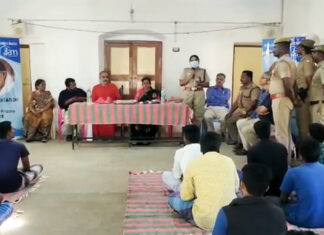 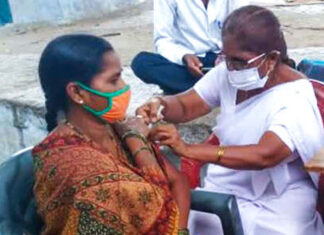 July 6, 2021 0
In rural India, there has been widespread hesitancy to get the COVID-19 vaccine, despite the fact the area accounts for 65% of the country’s...