Water scarcity has been a major thrusting issue in rural India, warranting a high demand to design and implement different water distribution networks. Polluted wells, dried out hand pumps, lack of water source nearby cause the villagers to walk miles to fetch water for their daily needs. To this effect, Live-in-Labs® in collaboration with Amrita Wireless Networks and Application relentlessly worked on developing a micro water distribution system for almost 18 months. This system was designed, developed, tested and has been deployed in 7 different villages across India so far. The challenges faced during the deployment of this system differed diversely among the 7 villages. In addition, it was a participatory intervention which has proven to be both unique and effective for successful micro schemes with a minimum per capita cost of installation and maintenance. The presence of a water distribution system was found to have a tremendous impact on the physical, psycho-social well-being which is indispensable for their economic growth.

For many villagers in India, collecting and carrying water is part of their daily routine. However, villagers often have to walk several kilometers to collect water necessary for themselves and their families, sometimes walking several times a day. Many villagers, especially women, collect and carry between 200 and 500 liters of water per day for their families and cattle.

Recognizing the hardship of the villagers, Amma encouraged faculty, staff, and students from the Amrita Center for Wireless Networks and Applications, the Department of Civil Engineering, and the Amrita Center for International Programs at Amrita Vishwa Vidyapeetham to work with members of Amrita Self Reliant Villages (ASeRve) and travel to villages in Rajasthan, Odisha, and Kerala to build water distribution systems for more effective water use and management. The project began in Kerala in April 2015 and in Rajasthan and Odisha in July 2015. The project was an initiative of Amrita’s Live-in-Labs® program- a program that applies theoretical knowledge to address real world challenges faced by rural communities in India.

In the village of Harirampur, located in the Sawai Madhopur District of Rajasthan, water is now distributed to all 65 homes through a pipe system with an additional 5 taps conveniently placed in public areas. The pipe system connects to two overhead Sintex water tanks that currently stores 5,000 liters of water each.

Since the M.A. Math recently constructed a bore well in the village, the team from Amrita Vishwa Vidyapeetham focused on collecting available water in the overhead water tanks via a network of pipes. To lay down the pipes, two trenches were dug. The Amrita team manually dug a trench 55 meters long and 3 feet deep. The other trench, 1,050 meters long, was dug by an earth moving JCB machine and was manually leveled to approximately 4 feet deep.

Villagers are extremely grateful to Amma “for bringing water to their doorstep.” Many villagers expressed how they had lost hope that anyone would ever help them since the village was not accessible through structured roads. One of the villagers, Mr. Rajeesh Kumar Meena said, “Nobody wanted to come here, but Amma did, and now I want to go and see Amma.”

The village children, many of whom had never seen water taps before, also said that Amma had done a very nice thing for them.“Amma has done so much for us, we also want to do something for Amma. What can we do?” asked the children innocently to the Amrita team members. All the village children agreed that because of Amma’s compassion they can now take a bath everyday without walking several kilometers to the local river.

In the village of Guptapada, located in the Khurda District of Odisha, water is now distributed to 60 homes with each cluster of households sharing a tap. Villagers are now able to receive water through a pipe system which connects to an overhead Sintex steel water tank that currently stores 5,000 liters of water.

To lay out the pipe network, the Amrita team, with the help of villagers, manually dug two trenches– one 700 meters long and 2 feet deep and another 550 meters long and 1 foot deep. The Amrita team and villagers also dug the foundation pit for the water tank’s steel structure. Plans are in place to build another 5,000 liter water tank in the future. Plans are also in place to commence water conservation awareness initiatives in the village.

When villagers first found out what the Amrita team intended to do, they became very enthusiastic to help. They wanted to “work hand in hand with Amma’s team” to bring water to the village. “All of you are helping us. We will also help you. This is our village. We will work with you!” they said.

Many villagers expressed their gratitude to Amma because they no longer needed to make the strenuous trek to collect and carry water back to the village. Urmila, a young village woman, said that having the water tank in the village “is a great privilege” and one that will not go unacknowledged.

In Komalikudi, a tribal village in the Idukki District of Kerala, residents only had access to water seven months out of the year. What water they did consume and use was often contaminated due to run-off from their fields which carried a high concentration of chemical pesticides. Recognizing the need to address this challenge, the Amrita team decided to work with villagers to bring clean water to the settlement.

The team and villagers held regular meetings at the village community center where a water committee planned where to dig and establish the bore well and where to set-up the steel water tanks. After considering several public spaces, the committee decided to establish the bore well and tanks in the village’s temple compound, a decision that was surprisingly supported by the temple priest. The committee also decided how many taps would be placed and at which locations.

After considering the requirements of the village, the Amrita team designed a water distribution system that included a bore well with a pump and two overhead water tanks (currently stores 3,000 liters and 5,000 liters, respectively) to supply water to the entire village via a network of pipes. The pipes were laid out throughout the village and water taps were installed for each cluster of houses and in various public spaces. All 90 homes, including the village’s community center, the Anganwadi (pre-school), and the multi-grade learning center now have access to water. Furthermore, the entire water distribution framework is powered by a micro hydro generator – an initiative by Amma to utilize renewable resources to provide electricity to rural communities. The continuous supply of power from the generator ensures that villagers have access to clean water throughout the day for their daily needs.

Overall, there was an immense amount of community participation and villagers generously donated their time, land, and work hours to the project.  One villager even gave access to his land and that of his family members to lay down the pipe network. Other villagers helped dig the foundation for the bore well and the trenches for the pipes. Seeing the work done by the Amrita team and villagers, Thathi, Komalikudi’s innocent yet wise matriarch, repeatedly said the availability of clean water inside the village was “a great blessing from Amma.” The sentiment was echoed by the village children who would squeal with joy every time they opened a tap, marveling at the flow of cool, clean water. They would then engage in childish frolicking by splashing water on each other, bringing smiles, giggles, and laughter all around.

Due to the dedication, selfless service, and long hours invested by Amrita faculty, staff, and students, the majority of homes in all three villages now have direct access to water, saving many villagers an arduous and repetitive commute. Furthermore, with easy access to water, residents of all three villages can now conveniently use the newly built toilets provided for by AMMACHILabs. Also, AMMACHI Labs’ Sustainable Rural Sanitation Model and Training Program now empowers village women to build their own toilets, further encouraging the use of toilets in their own homes. From a safety standpoint, the combined initiatives in water and sanitation make young girls and women less vulnerable to physical attacks by miscreants.

With easy access to water, it is expected that the overall hygiene of the villages will increase and the spread of infectious illnesses will be stemmed. Children will also be motivated to adopt proper hygiene habits, thereby improving their health and consequently increasing attendance at school.

These are just a few examples of how Amma’s grace, guidance, and compassion, coupled with the talent and tenacity of Amrita faculty, staff, and students, uplifts marginalized communities and contributes to the betterment of their lives. This is also an example of how Amma leverages science and technology to address and solve real world problems with observable and measurable outcomes.

Finally, through the above village projects, Amma has succeeded in giving participating young professionals and students at Amrita Vishwa Vidyapeetham an opportunity to look beyond their immediate self-interests and well-being alone. She has cultivated in them a spirit of service and caring for communities that are less fortunate and privileged than themselves.  “It was a wonderful experience. Our team was extremely happy to be able to do something that actually benefits villagers and decreases their difficulties,” said Mr. Deepak Brahmanandan, a staff member at Amrita Center for Wireless Networks and Applications who volunteered in Harirampur, Rajasthan. Aside from Mr. Brahmanandan, many other young staff and students expressed how fulfilled they felt that they were able to apply their education and training to address challenges faced by rural communities- a sentiment they will hopefully carry into their future professional lives.
Cross Posted from www.amrita.edu 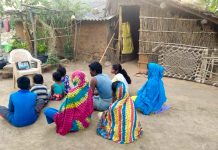 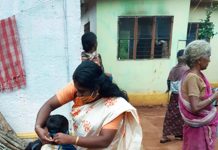 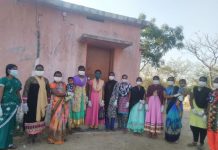 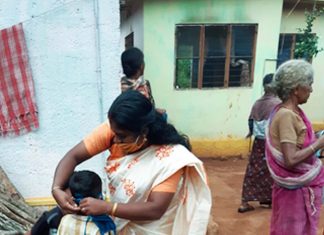 March 15, 2021 0
COVID-19 brought forward a challenge to India’s education system as never seen before. When the nationwide lockdown came into effect on March 22nd, all... 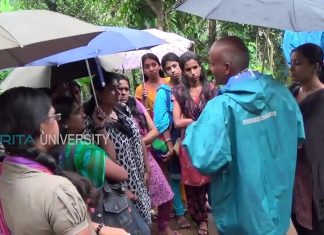 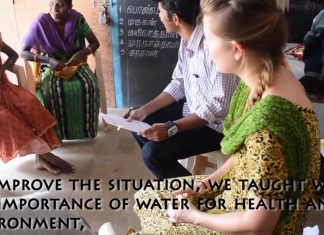 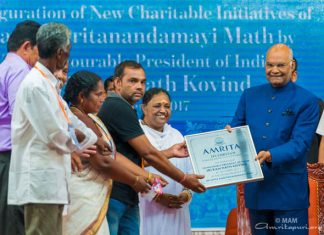