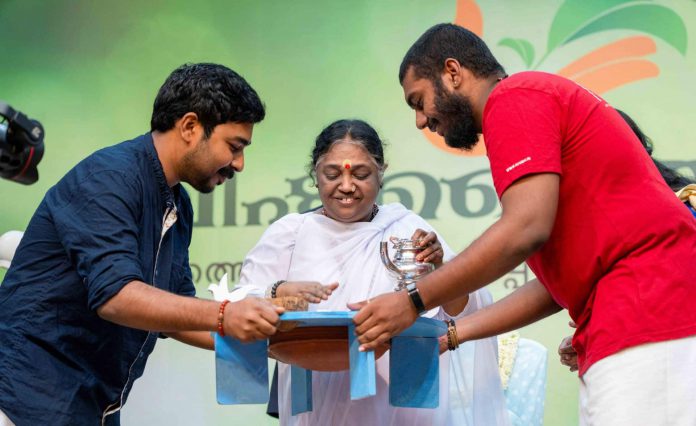 The fifth annual Vishuthaineettam campaign was launched in Amritapuri Ashram on Saturday. Conceived of by Mata Amritanandamayi Devi in 2015, the campaign pushes to infuse the Vishu festival with a new green tradition: Elders gifting children not only Vishukaineettam—pocket change—but also Vishuthaineettam—saplings.

After blessing thousands of saplings prepared for distribution, Amma lamented the lack of harmony between mankind and nature, saying that it is only through united efforts and grace that the harmony could be restored to some small degree. Mentioning last year’s tragic monsoon flooding, Amma said, “Every natural disaster is a warning to humanity to correct our mistakes if we want to avoid bigger calamities.” Amma said the saplings would help. “Let our children plant and nurture these saplings,” she continued. “We must protect plants, trees and every other living being, understanding them be a part of us. Each year may Vishu mark the start of such worship. Our children should be taught to love and protect nature. This Vishu, may this culture be what we impart to them as the real Vishukaineettam.”

The saplings and seeds—which included pomegranate, mango, rose apple, guava, and other species—will be distributed across all 14 of Kerala’s districts by members of Amrita Yuva Dharmadhara (AYUDH)—the youth wing of the Mata Amritanandamayi Math.

This year, a new facet of the campaign was inaugurated: Muttathoru Pazhathopp, Mukaliloru Kilikkootu—“An Orchard in the Yard, a Birdhouse in the Treetop.”

Speaking about the importance of setting up birdhouses and feeders, Amma said, “A mere plank of wood is enough. On the plank, leave some water for the birds to drink and a handful of grain. In the heat of the summer, let the birds come and drink the water and eat the grain. Whether you are university student or schoolchild, it is Amma’s dream and desire that all of you take part in this new initiative.”

During the last five years, AYUDH volunteers have distributed more than 3.5 lakh saplings in Kerala through 230 Vishuthaineettam events, conducted in all 14 districts. And since 2000, the Mata Amritanandamayi Math has planted more than 10 lakh trees as part of the United Nation’s Billion Tree Campaign. This Vishu, AYUDH volunteers will also plant fruit orchards at the homes of Amrita Vishwa Vidyapeetham faculty and other employees, free of cost.

“The Vishuthaineettam initiative has seen unprecedented acceptance among the people of Kerala,” said Swami Amritaswarupananda Puri, Vice-Chairman of the Mata Amritanandamayi Math. “Several other organisations and individuals have started taking it up and are now conducting tree-planting drives in connection with the Vishu celebrations.”

Amma concluded her talk, saying, “How beautiful Kerala would be if it were full of birds, butterflies and flower groves again! If the land becomes bountiful, that bounty will reflect in our individual lives as well. We will be full of joy and beauty, within and without.”