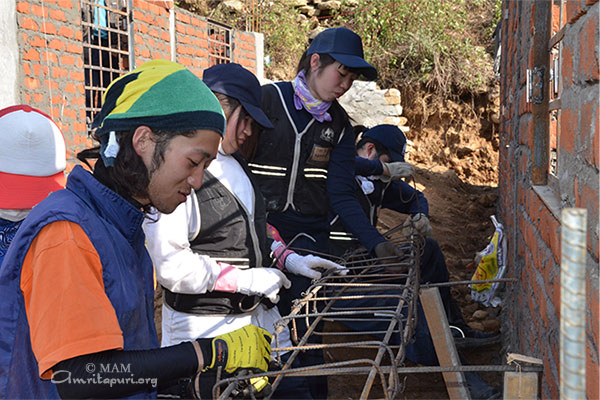 In order to participate in the rehabilitation efforts, a group of 73 students came down from all over Japan to the flood-ravaged areas. Chandrapuri was the first village chosen for the project and it lied on the way to Kedarnath, in the district of Rudraprayag. Students from the IVUSA (International Volunteer University Student Association) had been collaborating with Embracing the World since 1998. Their participation played a big part in building homes in Kerala and Tamilnadu after  the 2004 Indian Ocean Tsunami, and more recently in 2011 and 2012 in Raichur, after the devastating floods in Karnataka.

Many volunteers in the group were already been to India on several service assignments. Remarkably, those few weeks of time they spent volunteering, involving long days of hard physical labor, was their only vacation for the year. Inspired by Amma’s own life of dedication and service, they chose to spend their vacations not for their enjoyment, but to do something for the benefit of the less fortunate.

Upon their arrival, the students were given a formal welcome and honored as official state guests by the Chief Minister of Uttarakhand, Shri Harish Rawat. When addressing the students, he expressed his admiration for their chosen path and heartfelt gratitude towards their efforts.

Over the next several days the students were involved in all aspects of the construction work including concreting, assembling the metal foundation beams and transporting building materials from the riverbed to the sites on steep hills. They were an extremely well organized group which divided themselves into smaller teams to work at different construction sites. Even though the work involved heavy manual labor, the level of enthusiasm displayed by the Japanese volunteers had invited the affection of the local villagers and together they had turned the whole activity into a party-like event filled with laughter.

Throughout the day, the students and villagers toiled hard in climbing up and down the steep hill to the hamlet of Batwadi Sonar, carrying stones and sand to build a community hall. The working day came to an end when everyone gathered together around a giant Pipal tree to sing bhajans together, before the sun went down.

On their final morning of work, the Japanese students introduced the local villagers to the Amala Bharatam Campaign and worked together with the villagers in clearing the trash and debris from the area including the river. Before leaving, the Japanese students took part in a formal cultural program held at one of the local schools in the town of Chandrapuri. The Rudraprayag District Collector, Mr. Raghav Langar presided over the festivities which included many songs and dances performed by both the Japanese and local students and was attended by hundreds of local people.

When it was time to bid adieu, it became a difficult situation for both the students and the villagers alike as they had become very close over the past few days. During their interaction, both the volunteers and the villagers had witnessed the lines between giving and receiving disappearing and they realized that even though they spoke Japanese and Garhwali, they were not so different after all. The experience was rich and rewarding, said the Japanese students who donated their time, energy and enthusiasm to build a brand new life to the villagers.