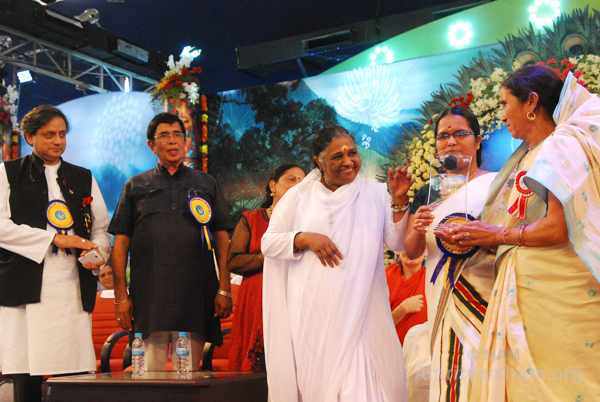 On 10th  Sept 2013, Mata Amritanandamayi Math ( MAM) had announced two massive charitable projects: a 50-crore relief-and-rehabilitation project in the flood-ravaged state of Uttarakhand and a program to adopt 101 villages throughout India. A total of 500 houses were destroyed across 42 villages in the districts of Rudraprayag and Uttarkashi and the Math would rebuild each and every one of them, said Swami Amritaswarupananda, vice chairman of MAM in a press conference held at New Delhi. Along with the new houses, the MAM would also provide scholarships to poor children and pension to widows and the handicapped, Swami added. In addition, SHG groups for women to do home-based businesses would be set up in Uttarakhand along with a care-home for orphaned children, he further clarified.

The 50-crore relief-and-rehabilitation project in a nutshell

Across 42 villages in the districts of Rudraprayag and Uttarkashi, the MAM would build 500 homes to replace all the homes destroyed by the floods, at the sites provided by the Uttarakhand State Government. At the launch of the project, Sri. Kodikunnil Suresh, Hon. Minister of State for Labour, Kerala had presented the plaque representing the MAM’s commitment to reconstruct the homes to Ramamurthy, representative of Uttarkashi District in Uttarakhand.

In an effort to empower the local communities, MAM would invest in establishing computerized vocational training centers in Uttarakhand. During the event, Smt. Shaila Rani Rawat, Honorable Member of Legislative Assembly for Kedarnath, presented a plaque representing the Math’s pledge to provide Women’s Empowerment & Vocational Education Training in the region to Shobender, representative of Uttarkashi District in Uttarakhand.

Another key component of the rehabilitation project was to enroll impoverished children from the affected villages into MAM Vidyamritam scholarship program. During the launch, Veerender Rawat, Congress Leader (and representative of Harish Rawat, Union Minister for Water Resources), presented the plaque representing the MAM’s Vidyamritam pledge to representative Vikram Naghi of Rudraprayag District Uttarakhand.

Provision of basic healthcare was an integral part of the Uttarakhand project. To serve the affected population, the MAM would build centrally located medical centers in villages. During the event, Smt. P.K. Jayalakshmi, Hon. Minister for Welfare of Scheduled Tribes, Gov. of Kerala, had presented the plaque representing the MAM’s pledge to build healthcare centers in the region to Smt. Kurwani Bartwal representative of Rudraprayag District, Uttarakhand.