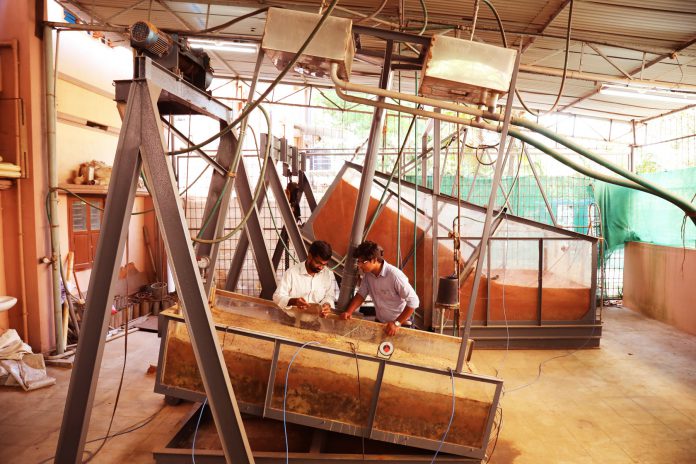 The second-level warning was subsequently broadcasted on Amrita TV via a scrolling announcement at 1:00 a.m. on Friday, August 7th. The message informed viewers of the possible occurrence of soil slips and landslides at different areas in Munnar and that residents should take necessary actions based on the instructions given by government officials.

The warnings were based on real-time data received from Amrita’s data sensors, which had indicated that rainfall had crossed safety thresholds and that the pore water pressure— the pressure of groundwater held within a soil—had likewise increased to unsafe levels in several locations in the region.

Several landslides in Munnar did occur after this warning, including one in which occurred after 4 a.m. on August 7th, 2020. The first regional warning was issued by Amrita to state officials more than 13 hours before the event.

Since its launch in 2009, Amrita’s landslide detection system in Munnar—which consists of more than 100 geological sensors and more than 10 wireless sensor nodes at six different locations—has effectively issued warnings in 2009, 2011, 2013, 2018 and 2019 as well. The system runs 24×7, collecting and processing real-time data such as the quantity of rainfall, moisture, pore-water pressure, vibrations, and tilt.

“Amrita’s IoT system for landslide monitoring and early warning has proved its efficacy over the years. It is more reliable than any other system in the world,” says Dr. Maneesha Sudheer, Director, Amrita Center for Wireless Networks & Applications. “My hope is that the Kerala Government will join hands with Amrita to build an effective disaster-management protocol to be followed when the system issues alerts.”

Amrita’s system is the world’s first IoT system for landslide monitoring and early warning. It was designed to work collaboratively with government officials to avoid loss of life due to landslides. It is patented in the United States and is the only such system that is multi-level, made-in-India and integrated with machine learning and artificial intelligence. It was designed to constantly learn from the data it receives, and thereby continuously refines its accuracy.

The majority of landslide-warning systems only use rainfall threshold as a parameter to provide alarms. However, this often causes false alarms due to the delay in time it takes for rainfall to absorb into the hills. Therefore, rainfall alone is an inaccurate indicator. Hence, Amrita designed and developed a multilevel integrated system that analyzes other factors as well, such as rainfall infiltration, pore water pressure, vibrations, movements, and slope instability. Amrita’s system also takes into account meteorological, geological and hydrological data. Moreover, via machine-learning, the system predicts the probability of the onset of landslide-prone conditions with least 12 hours notice.

It was Amrita’s work on this system that led to its recognition as a World Center for Excellence in Landslide Risk Reduction in 2017.

Amrita has developed and deployed a similar real-time landslide warning system in Chandmari, in the Gangtok District of Sikkim. Custom-made for Himalayan geology, the Sikkim system comprises more than 200 sensors that measure many geophysical and hydrological parameters, such as rainfall, pore water pressure and seismic activity. The system is currently monitoring a densely populated area spanning 150 acres.