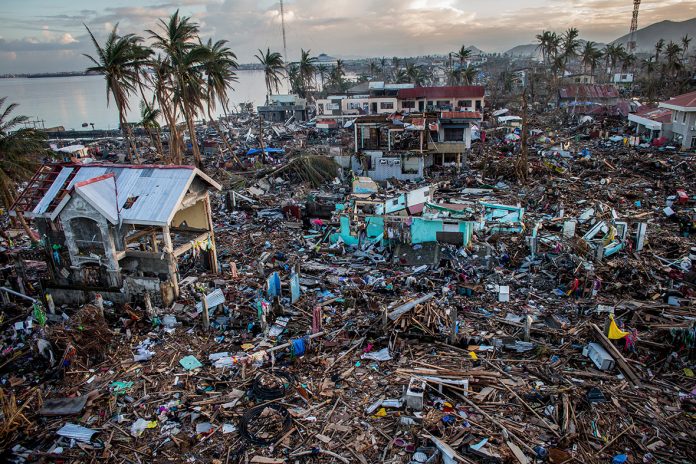 Mata Amritanandamayi Math has donated ₹6 crore for rehabilitation of victims of Typhoon Haiyan that hit the Philippines five months ago. Embracing the World, a network of charities overseen by spiritual leader Mata Amritanandamayi Devi, handed over the cheque to the Office of the President of Philippines in Manila on April 2. Haiyan had hit the Philippines coast on November 8, 2013, killing at least 6,300. Swami Ramakrishnananda Puri of the US wing of the charity said that vocational training would be provided to people displaced by the typhoon and students would be granted living expenses to complete high school.

Amma said that she is donating a relief and rehabilitation package worth $1 million for the people affected by super typhoon Haiyan in the Philippines.

Haiyan, believed to be the worst storm to hit the Philippines, has affected 13 million people and destroyed one million homes.

“I was greatly distressed to hear about this devastation, which took the lives of so many innocent people in the Philippines and which added an immense burden to those who were already living in poverty. In a fateful moment, the storm snatched away the dreams and hopes of hundreds of thousands of others who survived the initial disaster. During this time of immense agony and sorrow, Amma’s heart goes to those who have endured this tragedy and prays for their peace and mental strength. She also offers her prayers to the departed souls.” said Amma.