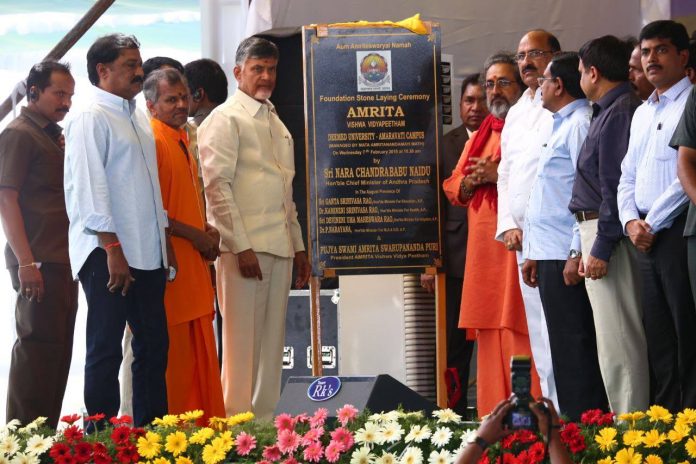 The foundation stone laying ceremony started by offering a prayer to Sri Mata Amritanandamayi Devi, Amma, Chancellor of Amrita Vishwa Vidyapeetham, for Her blessings. The welcome address was given by Dr. Prem Kumar Nair, Medical Director of Amrita Institute of Medical Science, Kochi. In his address, Dr. Prem said, “Amrita Vishwa Vidyapeetham is a multi-disciplinary university which has quickly achieved world class standards. Its is one of the best private universities in India.”

“Amrita Vishwa Vidyapeetham unfolds a place for enriching students, a place where they gather information and knowledge, not only for earning a living, but for living his/her life as a whole. The main idea or theme of education at Amrita is “Education for Life and Education for Living”.

CM Nara Chandrababu Naidu, in his inaugural address, said that the state government’s aim is to develop the state as a knowledge hub. “The campus will provide education to 50,000 students and in 150 acres, science, engineering, management, medical, etc., institutions will be set up for the students,” CM Naidu added. The Andhra Pradesh CM also said that the state government’s aim is to make Amaravati the number one city in India and will set up over 14 medical colleges here which will make it a health hub.

Amaravati Campus will be the  seventh campus of Amrita Vishwa Vidyapeetham. Once completed, the campus will offer the full complement of courses including Engineering, Management, Medicine, Humanities, Arts and Sciences, Biotechnology, Nanosciences, Philosophy, Yogic Sciences, Ayurveda and other upcoming technologies. It will have state-of-the-art infrastructure, having tie-ups with top-ranked universities globally.