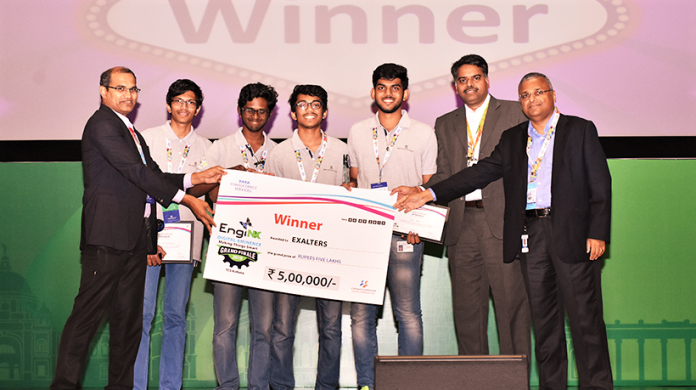 Amrita student team from the Coimbatore campus have won the TCS ENGINX grand title with their project “The pioneers of a Viable and Versatile Wearable for Suppression and Nullification of Hand Tremors.” Team EXALTERS from Amrita School of Engineering Coimbatore campus was mentored by Dr. Sriram Vasudevan. Amrita was also the grand title winners for the TCS EngiNX 2018 edition.

EngiNX is an Engineering Design Innovation contest conducted every year by Tata Consultancy Services and this year, our Amrita team EXALTERS won as Grand Title winners and were awarded prize money of Rs.5,00,000.

Tata Consultancy Services, (TCS) has hosted the grand finale of the seventh edition of its premier engineering and Internet of Things (IoT) challenge, EngiNX – Engineering for the Next Generation in Kolkatta.

The challenge witnessed registrations from over one lakh students from 400 institutes across the nation.and with the theme ‘Digital Eminence: Making Things Smart’, the goal for participants was to create smart products that would help reshape businesses, and also impact our everyday lives.

The teams used digital technologies, such as IoT, data analytics and cognitive systems, to solve problems in manufacturing, social, life science and healthcare, and consumer goods and logistics.

After four thought-provoking rounds, the top five teams made it to the grand finale. and Amrita Vishwa Vidyapeetham, Coimbatore was declared winners, followed by runner up –Institute of Engineering and Management, Kolkatta and second runner up –K.S Institute of Technology, Bangalore.

The winners were awarded a grand prize of Rs 5 lakh, while the runners up took home Rs 2.5 lakh, and the second runners up received Rs1 lakh and all the finalists received provisional offers to join TCS after completing their engineering degrees.