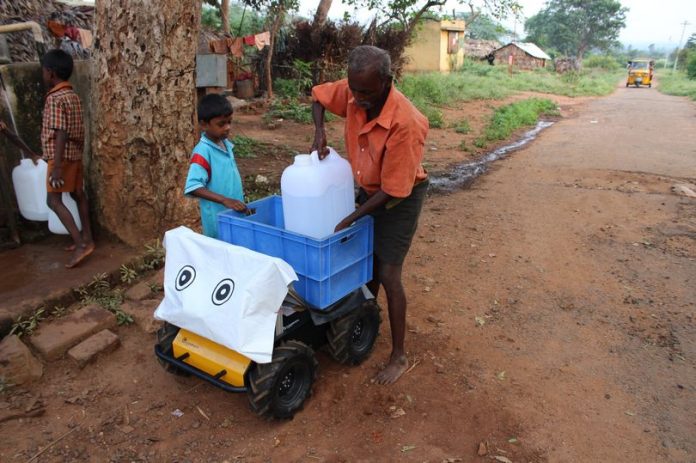 The remote-controlled device can carry three 20-litre bottles at once and is helping make locals’ lives easier.

On world water day, researchers at Amrita University with a University of Glasgow researcher is highlighting how residents of a remote Indian village have benefited from social robot which helped them with their daily burden of water-gathering.

Dr Amol Deshmukh, a research associate in the School of Computing Science, recently completed a project with partners from Amrita University which aimed to explore how a water-carrying robot would affect the lives of villagers in Ayyampathy in southern India.

More than half of India’s population has no access to tap water in their homes. Instead, they spend a great deal of time and energy every day carrying water from wells, a task which is overwhelmingly performed by women.

The research team, who visited the village in November last year, used a four-wheeled device from Clearpath Robotics known as a ‘Husky’ to help 11 volunteers from Ayyampathy’s 200 residents carry water to their houses from the local well. The robot could carry three 20-litre bottles at a time, and communicate using a synthetic male voice. The robot’s motion and speech were both controlled by the researchers via remote control.

The researchers were keen to see not just how much labour could be saved by offering villagers the use of the Husky, but also how people who had never seen a robot for themselves before would interact with it.

Akshay Nagarajan from Amrita University said “Another thing that is unique about this study is it is making an effort to understand the challenges of introducing robotic solutions in a real life rural setting. This is an essential step towards informing design decisions for robotic products that seek to address the populations at the bottom of the economic pyramid.”

Dr Deshmukh said: “Most of the research carried out to date on human-robot interactions are carried out in lab environments in urban settings, with people who have developed some conception of what robots are and how they work by seeing depictions of them in TV and film.

“We wanted to see how people from considerably more remote rural populations would view robots, which have a lot of labour-saving potential. Robot helpers are also ideally-placed to help those population reach the UN’s sustainable development goals of bridging the digital divide and opening up beneficial technology to people around the world, so it’s vital to explore how they are likely to be perceived in the developing world.”

The robot communicated with the volunteers, 10 of whom were women and one of whom was a man and who ranged in age between 15 and 70, to encourage them to place the water jugs on top of it and to show it the way to their homes. Once the volunteers decanted the water into their storage containers at home, the robot thanked them and reminded them to wash their hands before their next meal.

Dr Deshmukh added: “After several days of using the Husky, we surveyed each of the participants about their perceptions of the robot and how helpful they found it.

“Every one of them said the robot made their lives easier, and they unanimously reported that they enjoyed working with the robot. Interestingly, they were also unanimous on the robot being ‘alive’, despite being aware that it was being controlled remotely.

“We also asked if they thought the robot had a gender. More than a third of participants perceived it as ‘female’ although it communicated with a male-sounding voice and had no other gender-coded features, primarily because water-carrying is done mainly by women in their village.

“It’s clear that labour-saving devices like these bring real benefits to remote communities, and we’re keen to do more work in the future with our partners in India to explore these issues in more depth.”

Amrita University and its parent NGO, led by world renowned humanitarian Amma, popularly known as the hugging saint, carry out community development activities in over 142 villages all over India.

Researchers from its robotics and women empowerment research centre called Ammachi labs spend a significant amount of time with rural and tribal communities in order to understand their issues and nuances that are not often considered in technology design for such communities. 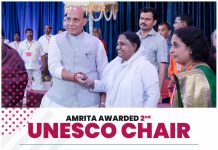 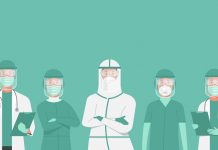 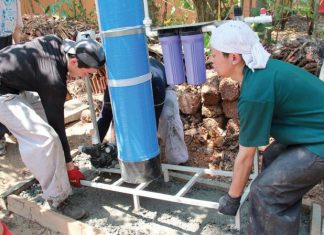 March 15, 2018 0
Seventy-one college students from 20 universities in Japan are among those who have made Amrita Vishwa Vidyapeetham’s Jivamritam Project, an initiative to bring clean... 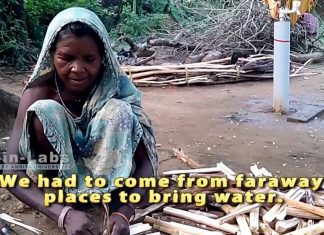 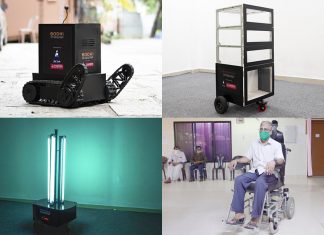 June 1, 2020 0
While Amrita Vishwa Vidyapeetham remains closed as per the Government lockdown, its professors and HODs continue to develop more and more innovations aimed at... 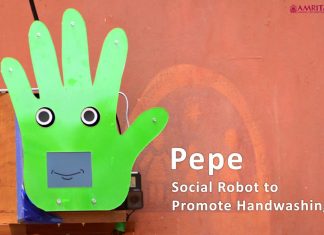