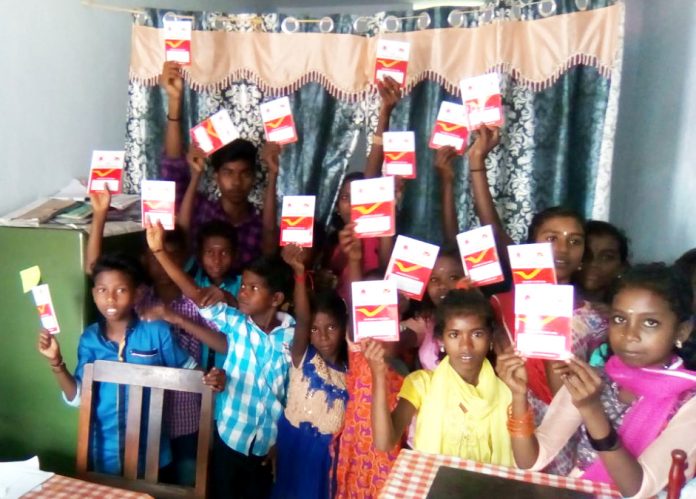 Eighteen tribal children opened accounts at the Vellamunda post office in Wayanad district, Kerala. The children of the Valaramkunnu tribal settlement trekked four kilometres downhill to reach the post office and start their small savings bank accounts.  These children are the first from their tribe to open accounts with the post office. They are attending the tuition centre run by Amrita CREATE, as an integral part of the Amrita SeRVe (Self-Reliant Village) project of the MAM (Mata Amritanandamayi Math). Sushma and Hari, the husband and wife team who teaches at the education centre and coordinates the activities of Amrita SeRVe, inspired the children to save the small amounts gifted to them by their relatives and parents and start these accounts to save up for a secure future.

It all started when Hari, who teaches at the Amrita Balakendra, the ashram’s spiritual learning programme for children, which meets in the village every Saturday, inspired the children to bring in 10 rupees every week as a small saving. It is deposited in their account every month by Hari and Sushma. “The children are very happy and bring in the money without fail, collecting the ten rupees from their parents and relatives,” says Hari. Anil, studying in the 10th, who has attended the education centre ever since it started four years ago, admitted: “Initially we started saving to spend on toys and clothes for festivals. But now we are also saving for our future.” Opening a savings account or even saving money for the future is a completely new concept introduced to the tribal settlement.

Amrita professor, Anju Bist is among the 75 women honored as Women Transforming India...

At the Amrita-PMKVY hub in the state of Chhattisgarh, students were excited to return in...

At the basis of all we do is the goal to ensure everyone has...
Previous articleAmrita hopes to create a comprehensive map of the vulnerabilities women face
Next articleMushroom Cultivation Training in Uttarakhand