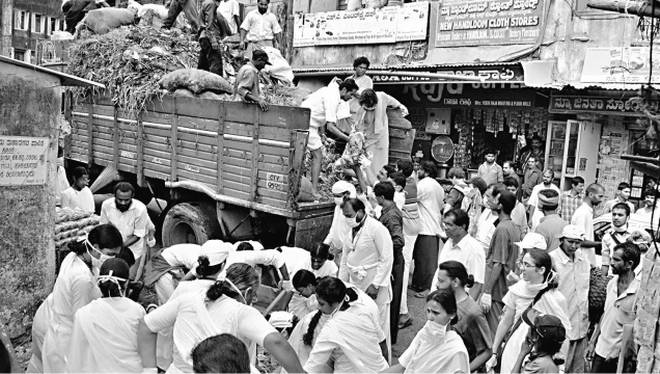 Many followers of Mata Amritanandamayi cleaned the central market area on Tuesday morning. Foreigners were among the volunteers.

They picked up the discarded footwear, plastics, vegetable and green waste, and other trash from the area surrounding the Central Market complex.

Elizabeth, a volunteer from Luxembourg, told The Hindu that in most countries the market places were usually not clean. She found Mangalore to be a clean city. Moana, another volunteer from Switzerland, said that volunteers cleaned the area on instructions by “Amma”.

Ms. Moana was visiting Karnataka for the first time. “It is a more advanced State compared to others. Mangalore city is clean,” She said.

A.R.G. Menon, a professor of English at Amrita School of Engineering, Amritapuri, Kollam, said that “amma” gave darshan to devotees till 3 a.m. Tuesday. Immediately, she instructed devotees to select a place for cleaning.

He said that it was natural to expect accumulation of trash near markets. “Compared to markets in other places, I find it lean here. We are cleaning the area as a service under Amala Bharatam project of the math. The project is on keeping surroundings clean,” he said.

Mr. Menon said there were volunteers from England, the U.S., and Russia.

The former Deputy Mayor Rajendra, who visited the spot, said: “It is an unfortunate situation of foreigners cleaning the city.”

Sanath Hegde, a doctor, said the cleanliness was on creating an awareness among people to keep the city clean.

Among the volunteers some were seen wearing gloves and a few had their masks on.

Many were found lifting waste with bare hands. Some volunteers were seen offering banana to their counterparts. Some officials of the Mangalore City Corporation had been supervising the cleanliness on the spot.

The cleanliness drive comes close on the heals of the “Save our beach” campaign launched by the district administration here on Sunday.

A few days ago people had participated in a “shramdan” campaign launched by the district administration.

Cross-Posted from The Hindu