Islam Hussein, a class 11 student who dreams of becoming a doctor, also lost both his hands in the explosion and has now been put on priority list for hand transplant

Bombs going off is common in 21-year-old Islam Hussein’s village near the ancient city of Taiz in central Yemen.

It was one such explosion that made young Islam a victim too. But his parents refused to give up on a chance to let their son lead a normal life. On the suggestion of a friend, Islam and his family reached India for further treatment.

The surgery, that involved complete reconstruction of the left eye, was conducted by a team of eye surgeons from the hospital led by Dr. Anil Radhakrishnan , Consultant, (Cornea & Refractive Surgery) and Dr. Gopal S. Pillai , Professor & HOD, Dept. of Ophthalmology. 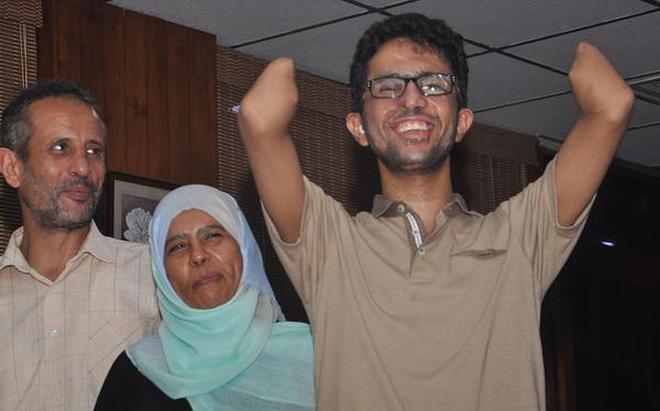 Doctors said Islam’s legs had to be amputated, but his father refused to give up and moved him to a hospital in Egypt, where both his hands had to be amputated below the elbow due to infection. Doctors were not capable of helping him further, however. One of Islam’s friends recommended treatment in India, and the patient and his family arrived at the Amrita Hospital in December 2017, after undergoing plastic surgery on his foot in Jaipur.

Islam considers himself lucky to be alive. His limbs and eyes were lost in an explosion when he accidentally stepped on a mine laid by warring groups.

Speaking to the media after regaining his eyesight, he said: “My family was my main source of strength and support during this difficult time. It is like a second birth for me as I had given up all hope. I always had dreamt of becoming a computer engineer, but I want to become a doctor and help transform lives, like the doctors here have transformed mine.”

A student of Class 11, Islam was walking on a street near his home when he accidentally stepped on the mine. The explosion in September 2017 had disfigured Islam’s face, mangling his eyes and severely injuring his limbs. He was moved to a hospital in Egypt, but doctors had to ampute his hands below the elbow because of infection.

He reached Amrita Institute of Medical Sciences (AIMS) in December after undergoing a plastic surgery on his foot in Jaipur.

Islam is the third of six children of a 45-year-old school teacher, Ahamed Muhammed and Dikhra Hussein, 40.

Islam regained vision in one eye after undergoing corneal transplant at AIMS. The surgery involved complete reconstruction of the left eye.

Islam is now looking forward for a hand transplant so that he can lead a normal life.

Subscribe and receive our newsletter packed with awesome stories to inspire you !

amritaworld.org is a news aggregation portal of all the activities around the globe inspired by Amma, Sadguru Sri Mata Amritanandamayi Devi