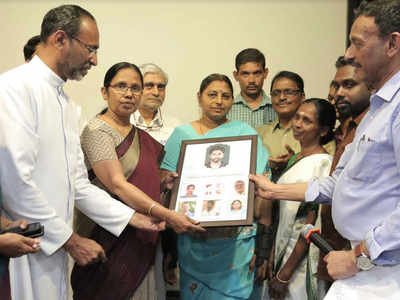 From asking her sons and husband to kill her after her hands were amputated after an accident at home, to now holding hands with them and smiling, life has changed for Lingaselvi since she got a hand transplant. This was possible because in family of Angamaly resident Arunraj (29) decided to donate his body after he was declared brain-dead in a road accident.

Despite all the negative publicity against organ donation and transplant programme, Arun’s family consented once he was identified as a potential organ donor. His heart was transplanted to a patient in Chennai, liver to a patient at Amrita Institute of Medical Sciences, pancreas and one kidney to another patient at AIMS, other kidney to a recipient at Kottayam Medical College and both hands to 49-year-old Lingaselvi at AIMS.

All these transplanted patients, who are now doing well, got together to thank the Arun’s family on Monday in a donor-recipient meet organised by AIMS. “This meet was very much needed because the instances of organ donation after brain-death have been very low in Kerala for the past few years. We wanted to show the bright side of organ donation and transplant,” said Dr Subramania Iyer, head, department of Head and Neck Surgery, AIMS.

“It’s a rebirth for me. I felt helpless without hands as I was dependent on others. But thanks to Arun, I now have hands,” said Lingaselvi, who presented a memento to Arun’s family in the presence of health minister KK Shailaja