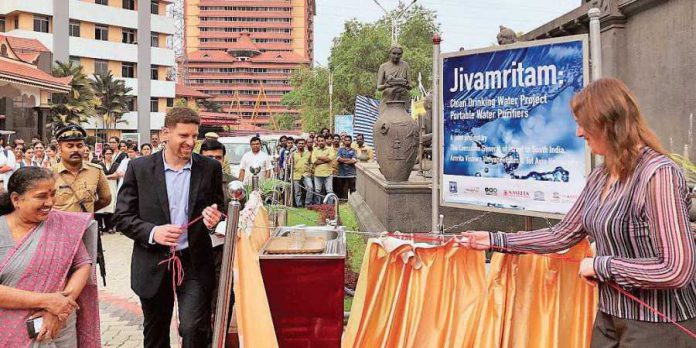 The inauguration of potable water systems under Amrita’s ongoing ‘Jivamritam: Clean Drinking Water Project’ took place at the Amrita Institute of Medical Sciences and Research Centre, on Monday. Each ‘NUFiltration’ device can purify eight litres of water per minute without using electricity, thereby serving a community of at least 500.

Developed in the aftermath of the 2018 Kerala floods with many regions facing potable water crisis owing to the contamination of wells and damage to pumping stations, Tel Aviv University and Amrita Vishwa Vidyapeetham collaborated on a research project aimed at developing sustainable, adaptive, low-cost water-filtration systems that are portable and easy to set up.

Bhavani Rao, Amrita’s UNESCO Chair in Gender Equality and Women’s Empowerment, said the rivers and groundwater sources in Kerala were polluted by debris and human bodies and animal carcasses. If not addressed sustainably, such post-disaster scenarios can lead to even larger disasters in future. “Since our research focusses on disaster preparedness, we are always investigating technologies that can assist humanitarian efforts,” said Rao.

Rafi Nachmias, Tel Aviv University’s UNESCO Chair on Technology, Internationalization and Education, said, “When I heard about the floods in Kerala and the potable water crisis, my heart went out to our friends there. Now through the collaborations of our UNESCO Chairs, Amrita and Tel Aviv University have agreed to conduct a research project focussing on the implementation of these groundwater purification technologies in rural areas in South India,” said Nachmias.

He added the ‘NUFiltration’ systems would be installed in flood-affected areas. Prem Nair, Medical Director,  Amrita Institute of Medical Sciences (AIMS), highlighted the importance of water purification projects for health and hygiene. Consul General Dana Kursh, Consulate of Israel to South India, Bangalore, emphasised that water is the very nectar of the soul and source of life makes Jivamritam a fitting project title.

The project plans to install five units in the post-flood regions of Kerala.

The Amrita Institute of Medical Sciences and Research Centre in Kochi and the Amrita Kripa Charitable Hospital in Kalpetta have been earmarked as the first of the locations for the installation. The Jivamritam team has identified other potential sites in flood-affected panchayats in Alappuzha and Pathanamthitta districts. Testing has already begun at one of the sites in  Budhanoor panchayat (near Chengannur). Jivamritam has also deployed water-filtration systems at 200 sites across all 14 districts in Kerala and four sites in North India, benefitting more than one lakh people in numerous communities.