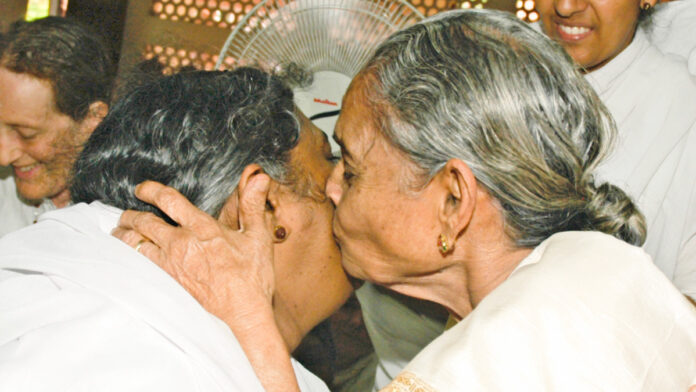 It was a gentle, cloudy afternoon in Amritapuri when Damayanthiamma, the human vessel who carried our most beloved Amma to this world, breathed her last at her home, near Amritapuri ashram. At the age of 97, she merged with the Divine at 2:50 pm on Monday.

Amma quickly arrived to honor her beloved mother, alongside her brothers and sisters. The non-stop chanting of sacred mantras took place for several hours as monastic disciples, ashram residents, visitors, and neighbors arrived to offer their tributes and prayers.

Damayanthiamma was born in the coastal village of Bhandaraturuttu in an area of the Kollam district in Kerala. Her family was highly devout and performed daily religious practices without fail. From childhood onwards, Damayanthiamma led a virtuous life in an atmosphere of piety.

At 20, she was married to Sugunanandan, Idamannel, an ancient fishermen family in the neighboring community of Parayakadavu. Damayanthiamma maintained her strict daily religious practices and became known as Pattathiamma—the brahmin lady. With unrelenting devotion to God as her mainstay in life, Damayanthiamma would observe various religious vows almost every day of the week. She would also frequently fast and only break the practice by drinking the water of tender coconuts which would fall from the trees at just the right time.

While carrying Amma in her womb in 1953, she began to have strange and wondrous dreams. Sometimes they were about Sri Krishna and sometimes Lord Shiva with the Divine Mother. One night, she even dreamt that a mysterious figure came and entrusted her with an idol of Sri Krishna which was cast in pure gold.

In the final dream, Damayanthiamma gave birth to Lord Krishna, and he lay on her lap drinking her breast milk. The next morning, September 27, she was at the seaside working when she suddenly had a feeling that she was going to deliver. This was strange, as in her previous pregnancies, she had experienced advanced body swelling that indicated it was time to get ready for delivery in the coming days. This time she was alone, as no such precursors had come.

Damayanthiamma quickly rushed home and gave birth to a luminous baby girl in an easy delivery. She experienced an atmosphere of complete peace and silence—just this precious child and her. But as she came out of her post-delivery mode, Damayanthiamma feared for the baby’s life. She did not display the usual behaviour of a newborn. Fortunately, a neighbor soon arrived to help them.

“When she was born, she didn’t cry. When I looked at her, she was motionless. I was scared, because the baby before her had died. But then the woman who helped me with the birth said, ‘Oh! she is smiling,’” Damayanthiamma once explained.

To her great surprise, the baby girl looked so peaceful, and her legs were as if in a meditative posture. This was highly unusual, but since Amma was healthy, Damayanthiamma was relieved. The gaze of her baby girl penetrated her innermost heart and was never to be forgotten. The baby, now named Sudhamani, grew up to be an extraordinarily loving and compassionate girl. Her exalted spiritual moods and her blissful singing and dancing, oblivious to the circumstances, were beyond Damayanthiamma’s comprehension.

Even though she meticulously observed religious vows and was extremely pious, she lacked the necessary spiritual understanding and hence could not conceive of who Amma really was. So much so, Damayanthiamma adhered to the traditional ways of raising her children, especially her daughters.

The existing culture was one where girls and women had strict rules to follow in terms of servitude and isolation from men. Being a strict disciplinarian, Damayanthiamma never compromised to take action against Sudhamani when she went against the so-called social norms, such as considering boys and girls equally, going out of the way to assist the sick, and helping the poor and needy, and so forth.

In addition, Damayanthiamma had no idea of what was going on with her daughter, when Sudhamani went into self-forgetful states of spiritual ecstasy or samadhi. Interpreting such occurrences either as disobedience or haughtiness, Damayanthiamma came down hard on Sudhamani. However, Sudhamani forever believed that her mother’s strictness was God’s way to teach her to achieve greater awareness, faith, and devotion.

In Amma’s own words, “Damayanthiamma observed all my actions minutely. She would take me to task if there was a little bit of trash left over in the courtyard after it had been swept. When all the vessels were washed, she scrutinized them, and if there was even a slight trace of dirt, she scolded me.

“While sweeping the ground, if even a single stick of the broom happened to fall out inadvertently, she would not spare me. Punishment followed if one speck of dust or ash fell into the pot while cooking. Nevertheless, I did never feel hurt when Damayanthiamma punished or reprimanded me, because I took all these experiences as the benevolence of Providence. My mind did not become bitter or resentful; instead, my mind turned more and more inwards.”

There were occasions, when Sudhamani was in deep samadhi, Damayanthiamma would throw a bucket of cold water on Amma to startle her awake.

Later Damayanthiamma confessed, “Now, I feel sad I punished her. But back then I didn’t understand the spiritual significance of Amma’s ‘strange’ behavior. That’s why I punished her. I was strict. I didn’t know who she was. She was different from other kids, so I used to severely punish her.”

It is only understandable if the villagers and others outside of the locality couldn’t appreciate Amma’s ways, as most of them were either ignorant of true spiritual principles, or due to their preconceived notions about the customs and habits. As for them, God resided within the sanctum sanctorum of a temple, or somewhere beyond the clouds.

Contrary to the Upanishadic declaration, “One who realizes God, becomes God,” they believed that God is an altogether separate entity. Because of this, Amma’s family had to go through unimaginable and innumerable ordeals. The family had to accept all the trials and tribulations. The culture was such. So, nobody could be blamed or criticized.

Nonetheless, the family fully supported Amma and all her spiritual undertakings once they had a glimpse of Amma’s divinity.

Today, this is seen as one of the greatest miracles Amma has performed. Her entire family transformed into her disciples. Amma’s parents decided to consider Amma as their everything—their Master and their God. They grew out of their limited ignorance of the mind and accepted Amma as their all-in-all.

Already a strong practitioner of spirituality, Damayanthiamma immersed herself in the bliss of Amma’s divine presence. She would lovingly care for Amma’s early disciples as if they were her own children. She would ensure that all who came for Amma’s Darshan were properly fed and given places to rest. She would also travel with Amma to visit devotees’ homes.

In return, Amma cared for Damayanthiamma with deep gratitude as the woman who brought her to this world.

Amma says that for her, everything is her Guru. Everything is here to teach her. But if she were to choose one embodiment, it would be Damayanthiamma: “Though she didn’t have any spiritual understanding, whatever she showed and advised had a spiritual purport. She was a good role model.

As Damayanthiamma’s body was cremated in the Ashram on Tuesday, Amma and her children looked on with immeasurable love and reverence for her. The chanting of Om Namah Shivaya, the Sri Lalita Sahasranama, and the eighth chapter of the Bhagavad Gita permeated the atmosphere, and all stood in awe of a supremely blessed woman with great fortitude. Humankind has never known such a legacy. And such a legacy may never be known again.