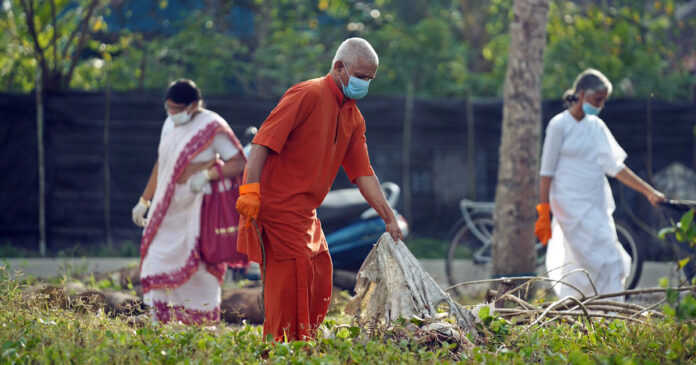 About 1000 people in Amritapuri gathered to take part in World Cleanup Day. Equipped with gloves, garbage bags and rakes, groups of diverse people united to collect trash. They worked their way along six kilometres of the Arabian Sea’s coastline from Azhikal Beach to the town of Kuzhitara.

After cleaning up the beaches for about four hours, the volunteers produced more than 500 bags of waste for disposal. In doing so, they also reconnected with the immense beauty of the sea, accompanied by its ecosystem of beaches, birds, animals, plants and trees.

Globally, World Cleanup Day is held over the course of a 24-hour period on the third Saturday of September every year. Its aim is to raise awareness of the mismanagement of waste, something which is an increasing global crisis.

It unites millions of volunteers, governments and organisations in 191 countries to tackle the global waste problem and build a new and sustainable world. The event mobilises all spheres of society to come together to participate, while at the same time reminding us that our daily actions of use and disposal urgently need to change.

Amrita’s participation was in conjunction with India’s National Agency for the Protection of Nature, Paryavaran Sanrakshan. Since 2016, people across the country have gathered to take part and now there is a strong presence across 24 states.

The core concept is that people’s natural inclination is to do the right thing. What is needed is to create a network of greater understanding to take environmental responsibility and bring about a cleaner, greener world for the coming generations.

Amma said is our duty to pray for the peace of all great souls...