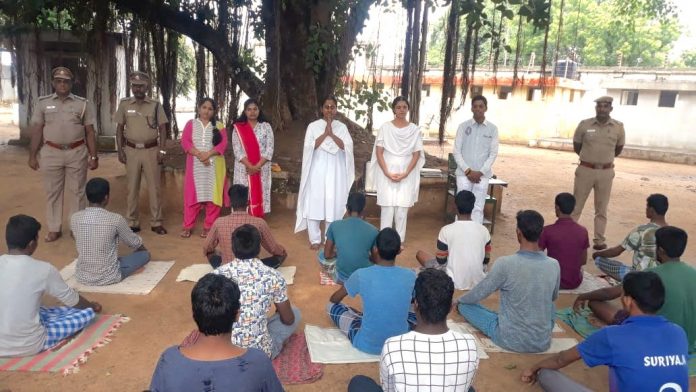 The Cirle of Love, Prison outreach programme  initiated by Mata Amritanandamayi Math, has started meditation practices in the prisons of Tamil Nadu. In association with the Tamil Nadu Prison Department, Mata Amritanandamayi Math helped prison inmates by conducting holistic workshops that motivated them to willingly pursue the path of good citizenship. The Amrita Volunteers reached out to more than 5,000 inmates in Tamil Nadu Central prisons, spread across Tamil Nadu.

The session started off with a brief introduction and invocation, followed by Yoga practices, ice-breaking games, philosophic discussions, and MA-OM meditation. The sessions were concluded by chorus chants of the universal prayer for world peace and happiness Lokaha Samastah Sukhino Bhavantu.  “We felt blessed to have such sessions, even in a prison. It gave us total peace with physical and mental relaxation. We would like to thank the prison department and the Mata Amritanandamai Math for extending such a beneficial service to us”- said the inmates.

“The yoga & meditation sessions conducted by the Mata Amritanandamayi Math headed by Brahmachari Vinayamrita Chaitanya from August through October has proven very beneficial for the 300+ inmates of this prison. The sessions have given a new insight to all and were able to relieve their stress and tension.” said Mr. Senthamaraikannan IPS, Head, Central Prison II, Puzhal, Chennai.

Amrita Volunteers are convinced that this initiative accomplished its prime goal of reducing stress among inmates and gave them a sense of purpose in their lives. We believe that such programs would have a meaningful impact on society at large, including Police personnel across the nation. The initiative is still being successfully conducted in Kerala prisons, with the mission of helping prison inmates to cultivate a wholesome mind of good thoughts and facilitate a productive or successful re-entry into society.

The sessions were held at the following locations

It can happen within a fraction of a second. Someone faces pressures that create...
Previous article
Amrita and University of Arizona Join Hands in Providing Impetus to Education and Research
Next article
Amrita Niketanam Children’s Care Home at Paripally, Kollam, Kerala