Meditation can bring a positive focus to our world’s leaders 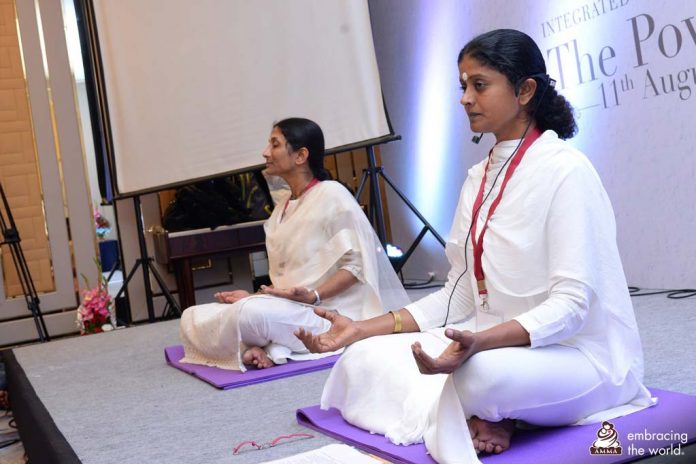 Mr. Nambiar was the keynote speaker at our ‘Power of IAM Leaders Conclave’ that took place in Pune, Maharashtra. The path-breaking event brought together director level executives from government institutions, senior decision makers, opinion formers, business leaders of Indian and multinational companies, as well as top professionals from education, culture, arts, health, sports and media. The focus was to inspire and create a catalyst for the exchange of fresh thinking and partnerships.

IAM stands for Integrated Meditation Technique, a creatively conceived and designed meditation program relevant to today’s world. Amma developed the process through her observations and experiences of life around the globe.

The IAM Conclave addressed the importance for leaders in varied fields to prioritize self-empowerment through meditation amidst their busy work lives. Mr. Nambiar emphasized how they could then help build ways to face disruption constructively.

He also said that the IAM technique embodies the universal compassion that Amma brings to the world, and this would help leaders build the capacity to be centered in a strong core.

Conclave participants discussed concrete and measurable actions that they could take to kick-start a meditation practice amidst their busy schedules. Dr. Vijay P. Bhatkar is the architect of India’s national initiative in supercomputing and Chancellor of Nalanda University. He affirmed the fact that yoga and meditation have been a way of life for thousands of years in India.

But the guests at the Conclave did not just sit and discuss. They practised the meditation. Brahmacharinis Praveena, Niseema and Jisha are certified IAM instructors who guided them through an immersive workshop.

Since its inception in 2003, IAM has transformed thousands of lives across the world. It also has a proven success rate. Studies conducted at Amrita Institute of Medical Sciences and Research reveal that those who regularly practice IAM have lower levels of stress hormones like adrenalin and cortisol. The results are observed within just two days of practice. Many other immunological benefits are also observed. Those who regularly practice IAM are proven to respond positively and calmly to high-stress conditions at the workplace.

The Conclave was jointly organized by Amrita Vishwa Vidyapeetham, Kerala and the Mata Amritanandamayi Math, Pune. A similar event was held in Kochi, Kerala last September.

It can happen within a fraction of a second. Someone faces pressures that create...
Previous article
Prime Minister Honours Amma for Largest Contribution to Swacch Bharat
Next article
AYUDH organizes Two Day camp ‘Dakshin’ in Kerala