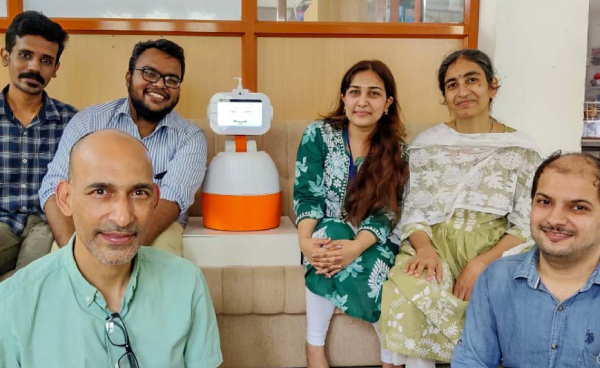 In collaboration with the Govt of India, AMMACHI Labs has designed an embodied social robot to encourage children in primary schools to practice proper handwashing and hygiene. Handwashing with soap is considered the “most effective vaccine” against numerous diseases. Despite awareness, proper hand hygiene practices are not followed due to a lack of it being a habit.

Feedback from primary school children is an integral part of Haksh-E’s development, and with that as part of the co-design process, an AI prototype for recognizing handwashing actions evolved. Toycathon is an inter-ministerial initiative hosted by the Innovation Cell in India’s Ministry of Education. In the 2021-22 season, it selected the idea for Haksh-E as a national finalist.

The design team consists of members from diverse backgrounds. Sreejith Sasidharan and Pranav Prabha are researchers at AMMACHI Labs who co-designed Haksh-E with the children. They also developed and built a handwashing action recognition system into the robot to determine the quality of handwashing.

Devasena Pasupuleti and Anand M Das are M-Tech Robotics & Automation students at Amrita Vishwa Vidyapeetham and doing their university internships at AMMACHI Labs. They worked on a game-based interaction between the children and the robot, which contributed to the children’s acceptance of Haksh-E.

Read the full article on India AI, an initiative by the Govt of India to develop a socially positive framework with best practices for AI development.