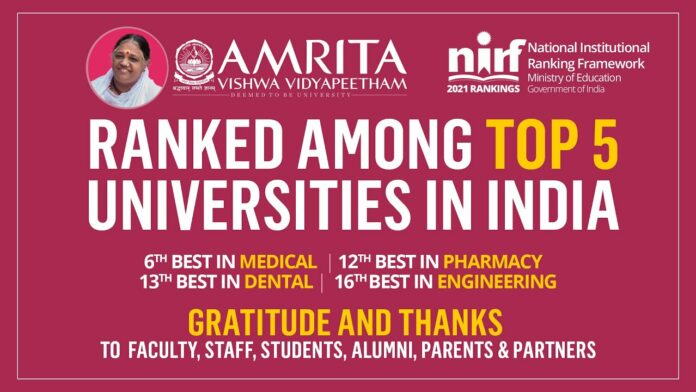 According to NIRF rankings 2021, Amrita School of Medicine, Kochi has been ranked as the sixth best medical college in the country by the Union Ministry of Education. Last year, Amrita was ranked as the seventh best medical college. Amrita is the only medical college in Kerala which secured a position in the top ten. Meanwhile, the All India Institute of Medical Sciences, Delhi secured the top position in the list. Amrita has even bagged a good rankings in Pharmacy and Dental College category. Amrita School of Pharmacy is ranked 12th in the pharmacy college category and Amrita School of Dentistry bagged 13th   rank in the dental college category, which is a better ranking when compared to the previous year’s ranking. Amrita University is ranked 12th in the overall rankings of the higher education institutions category. In addition, Amrita has secured 5th position in the rankings of universities and 16th position in the rankings of engineering colleges category. For the last five years, Amrita has topped the list of top 10 universities in the country. Dr. P. Venkat Rangan, Vice-Chancellor of Amrita Vishwa Vidyapeetham expressed his gratitude since academy, faculty and other facilities of the university was recognized. He even said that this achievement was the result of the joint efforts of all, including the teachers and students. The NIRF rankings was announced by Union Minister Dharmendra Pradhan in Delhi on Thursday. The National Institutional Ranking Framework (NIRF), which is the part of the Ministry of Education, announces the rankings every year to assess the quality of higher education institutions in the country. The rankings are categorized for 11 categories including Overall, University, Engineering, Management, Pharmacy, College, Medical, Law, Architecture, Dental and Research.