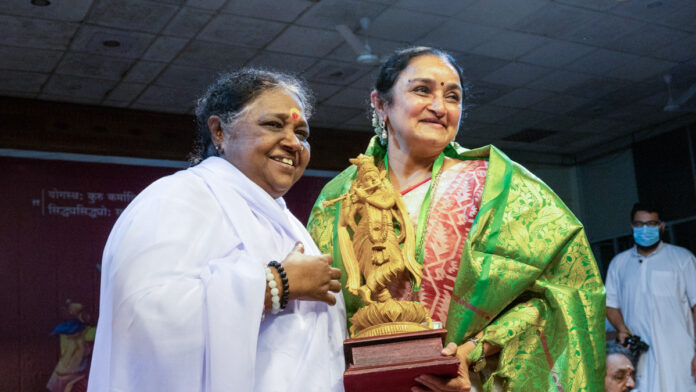 Dr Sandhya Purecha, who is known as India’s foremost Performing-Academician, arrived in Amritapuri to meet Amma. The Govt of India has appointed the renowned classical dancer as the Chair of W20, an engagement group for Gender Equality with India’s G20 Summit. Amma is the Chair of C20, the G20’s Civil Society engagement group.

With tears in her eyes, Dr Purecha shared that she has wished to meet Amma for a long time, but many incidents stood in the way. For example, on one occasion, she was not able to attend Amma’s birthday, as she had a previous commitment in Boston. Another time, she was invited to meet Amma in Maharashtra, but was not able to.

“And God. It’s Amma who called me today here. I’m very blessed. She’s not honoured. She’s accepted me as her daughter. I think matrudevo bhava. She’s the Divine Mother of all of us. May her blessings shower on us—always. Thank you very much. Thank you,” said Dr Purecha.

As a classical dancer, Dr Purecha is the senior-most disciple of the Late Guru Acharya Parvatikumar and has learnt under his tutelage in the traditional Guru-Shishya Parampara. Having earned her doctorate in Natyashastra in Theory and Practice of Angika Abhinaya in Bharatanatyam, she expresses herself as an incredible dancer, an ingenious choreographer, and an erudite author, scholar and researcher. Her passion for excellence and artistic talents shine through her commitment to Indian classical dance.

At the same time, she expresses a rare intensity and authority of her essentially modern style, convincingly disciplined by her immaculate traditional technique. This has resulted in her innovative approach towards shastra (theory) and sampradaya (practice), which has been described as a pioneering effort.

The unique contrast-enhanced mammogram helps to identify malignancies before visible on a standard mammogram....

Amma said it is our duty to pray for the peace of all great...
Previous article
Alappuzha District: Another 10,000 women attend the AmritaSREE SHG annual meetings
Next article
Minister J Chinchurani: Entrepreneurship empowers women in our communities