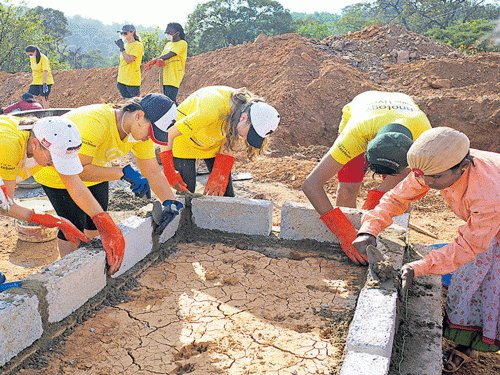 Living up to the global village concept, a group of American students are working hand in hand with Indian rural women to build toilets in the tiny hamlet of Sulagodu near Byse village in Hosanagar taluk of the district.

As part of global citizen course, eight students from Westminster school based in Atlanta, US, have joined hands with the women of the village to construct the toilets for the latter under a mission called Women Empowerment Sanitation, unded by Amrita University. Of the eight students of class 11 and 12, five are girls and three boys. Interestingly, two boys are of Indian origin. Katie McGahan, Ansley Harrallson, Rahil Kamath, Ruben Roy, Billy McGahan, Sydney Simmons (class 12)Lexi Young and Mary Bryce Brannen (class 11) are the students on the unique mission. Along with them, the school vice-principal Joseph Dimon and Science teacher Daina Kelly, parents Sucheta Kamath who hails from Maharashtra, and Lisa McGahan worked with the team. The construction of six toilets is in progress.

Around 24 houses in Sulagodu and the surrounding villages need toilets. Though language was a barrier, the Americans used gestures to communicate with the local women and have even picked up a few Kannada words like Akka, Amma, Mannu (mud), gundi (ditch).

The students took all safety precautions like wearing hand gloves and masks while working in the field. To beat the hot sun, they were given caps made up of arecanut leaf. They have been part of this activity for the past one week. They even painted the toilets enthusiastically.

A significant aspect of the project was that the villagers – Prema, Hemavathi, Srimathi, Savitri, Ganga and Jyothi – learned the construction techniques from an online video designed by Amrita University. They were also given a reference manual. Whenever in doubt, the women quickly referred to the video and returned to their work. In addition to roping in technology, to make sure the construction meets quality standards, the team works under the guidance of a local building supervisor.

Joseph Dimon, vice principal of Westminster, said the students gained practical experience of building toilets here, which is not possible in the US as everything is done by machines. They have also learned some useful lessons from their women co-workers. Construction is a combination of art, science, and commerce, he added with a grin.

The students also gave full credit to their non-literate women co-workers and admitted they were more skilled than themselves. The project made them feel truly like global citizens, they signed off.

"Mata Amritanandamayi is a radiant expression of love, and this love can be seen...